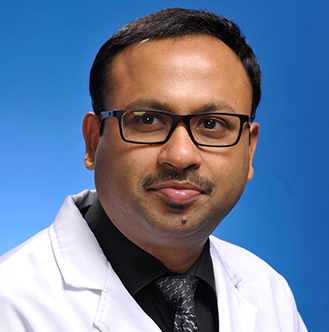 Dr. Sudipta Das is a senior vitreoretinal surgeon currently practising at Netralayam Superspeciality Eye Care Centre and BB Eye foundation VIP. Dr Das is a senior clinician and a surgeon par excellence with more than 15 years of experience in the field of ophthalmology. Before joining Netralayam, he had worked as a Senior Consultant Vitreo-Retina and Deputy Director, Academics at Sankara Nethralaya Kolkata. He was a visiting senior overseas faculty in the vitreoretinal department at CMER (Shenzhen and Hong Kong) Dennis Lam Eye hospital in 2015-2016.

Dr. Sudipta Das completed M.B.B.S from Calcutta National Medical College, Kolkata in 2002. He did his MS (Ophthalmology) from Vivekananda Institute of Medical Sciences Kolkata in 2008 where he later joined as the registrar. In this period, he led the eye department and ‘cataract surgery training’ for the postgraduate students.

He joined his fellowship in Vitreo-Retinal diseases at the prestigious Sankara Nethralaya Medical Research Foundation, Chennai in 2009. His fellowship training in Vitreo-Retina at Sankara Nethralaya, Chennai was under the able guidance of stalwarts in the field such as Dr Promod Bhende, Dr Lingam Gopal, Dr Tarun Sharma, and Dr Muna Bhende. The two years that he spent in the institute, honed his technical skills, built his professional acumen and shaped his career. He was adjudged the best outgoing Vitreoretinal fellow in 2011.

Subsequently he joined as an Associate Consultant in the department of Vitreoretinal services in Sankara Nethralaya, Chennai in 2011.

His special skills include complex retinal detachment surgeries, diabetic retinopathy, ocular trauma and combined surgeries involving both cataract and Vitreo-retinal procedures. He has performed more than 10000 vitreoretinal procedures during his stint at Sankara Nethralaya and abroad. He is one of the few doctors to initiate and continue complex retinopathy of prematurity (ROP) surgeries in neonates in eastern India. Dr. Das is today a competent and renowned physician in the field of ROP surgeries in Eastern India.

Dr Das has been a major contributor in the field of Ophthalmology. He has 12 peer-reviewed national and international publications to his credit. He has written several book chapters including a chapter on Central Serous Chorioretinopathy in the 6th edition of prestigious “Ryan’s Retina”. He has also presented in several national and international conferences and has conducted instruction courses on medical and surgical retina in various conferences. He is also a reviewer for Indian Journal of Ophthalmology and Asia pacific journal of Ophthalmology.

He was actively involved in teaching, training and mentoring vitreoretinal fellows and consultants, during his tenure of 10 years at Sankara Nethralaya Kolkata.

Dr. Sudipta Das is also an active sportsperson who takes keen interest in badminton and running.

A dedicated, illustrious, well mannered and a charming Vitreo-retinal surgeon who works with a motto – to do good for one and all!